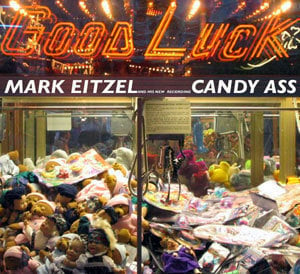 Mark Eitzel's first album of new songs since 2001's "The Invisible Man". "Candy Ass" is an American redneck term used to describe a wimp or a spineless person, a title as much for his detractors as for his fans - for his fine art of self deprecation.

As the vocalist/songwriter for one of the most influential bands to emerge from the '80s - American Music Club - Eitzel's sound is constantly changing, from his first solo effort of "60 Watt Silver Lining" through to "The Invisible Man", which was primarily electronic based. He has allowed "Candy Ass" to retain a timeless electronic sound by using both modern and older equipment, layering and interweaving his soundscapes over beds of percussion and drum loops to make some of his most beautiful songs. He also includes three acoustic based tracks including "Sleeping Beauty" which has become a current staple of his recent live solo shows. The instrumental tracks of the new album are taken from an original film soundtrack Eitzel has been commissioned to score (title tba) at the beginning of this year.